San Diego was delightful.  It was Sunny, Warm and Gorgeous!   We were there for  the National Meeting of the USPower Squadrons, and had plenty of free time to catch up with friends that we mostly see at these events.  When that ended, we rented a car and drove to Casa Grande, AZ.  Visited there with the Mangelsdorf kids’ Aunt Miriam (Gallo).   Her desert home is beautiful.  She spends much time and effort keeping flowers blooming in the dry heat, and the birds are very happy that she provides so well for them!

We flew back to Newburgh and drove back to the boat a couple of days later, stopping in Carlisle, PA to have breakfast with son Geoff, Amy and Pete!  No more overseas duty for Geoff. He is now part of the PeaceKeeping study group at the Army War College.  Good to know such activities exist in our military!

From Labor Day until the 23rd of Sept.  we Did Not Labor.  We simply enjoyed the summer breezes, occasional showers, and lots of lazy mornings with coffee and USA Today provided by the hotel.  We vegged out big time.  And loved every minute of it!

Took a quick trip to Raleigh, NC to visit the Headquarters of the USPS, and to have dinner with Fred’s nephew and niece, Dan and Heidi.  Stopped in Burke on the way home, and spent a day helping Jen and Chris pack up for the move to their new townhouse.

You are probably aware of the Lunar Eclipse that occurred at the end of the month.  I saw great pictures of it.  Stayed up to see the beginning, dozed and woke as the moon was re-appearing.

The end of Sept. we went back to condo-land for 3 weeks.  Lots of happenings there!  We went to New York City to follow up with the nice dr. at Memorial Sloan Kettering who routinely checks Fred’s delicate skin.  Melanoma remains Gone! Yay!  After that we crossed the street to the Plaza Hotel and had Tea.   I use a capital T as the fare was about what you would expect to pay for a dinner for four.  Yikes.  It was the Plaza, though, and we lollygagged for a long time before catching  the only conveyance we could find, a pedi-cab, to get back to Grand Central Terminal.  The UN was in session and there were black SUVs and guys with earbuds everywhere, and no cabs to be found. (What is the fare?  I asked the Pedi-Cab Pedaler.  It is metered, he replied.)  At GCT he smiled and said “Meter says 12 minutes at $5.00/minute.  That’ll be $60, please.”

We do not recommend Pedi-Cabs.   The good news?  We were on time for the train. 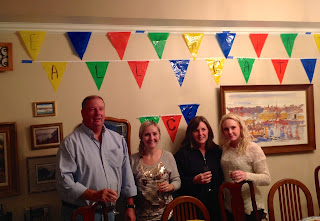 Back at the Condo Devyn planned, and with her big sister’s help executed a lovely party for Kris and John!  Sit down dinner for 18, and everything was dee-lish.  No goodbyes for Kris and John, who moved to their new home in Surfside Beach, SC the following Friday.  The girls said “See ya later!”    OCCC also had a work related party for Kris.  They will miss her a very great deal!!!

In addition to getting good reviews from doctors and dentists, we:
·      attended the Power Squadron’s D-2 fall conference in Poughkeepsie.
·      attended granddaughter Katie Rae’s string department (she plays the cello) concert with Mark Wood---a vibrant string performer who plays the 7 string electric violin/viola/cello/bass that he invented and markets.  He insists that music be fun as well as emotionally satisfying, and fun it was!
·      were present when granddaughter Laurel trumpeted the fanfare as the Arlington High School Band hosted its annual invitational event.
·      went to NYC with Linda Lee to see Wicked, and had a great dinner in the Time/Life Building Restaurant.

In between we spent some time on m&r of the condo at 37 Westbrook, making it ready for a new tenant.  That got a bit goofy when Central Hudson shut of the power (oops—their mistake) and refused to turn it on again until they could shut off the gas valve to the stove.   Couldn’t find the gas valve.   We had returned to Maryland to be ready to join the French family in Washington DC on Saturday for Boo at the Zoo!  And what a hoot that was!  All the kids, large and small, got T&T bags that were filled with candy etc. from the more than 40 stations around the Zoo!  Had a really fun evening!  Free bus rides to the restaurant where we had dinner, and back to the car. (If you ever need parking, check out SpotHero.com.  Efficient and effective.  Got us two parking spots in busy Washington, in easy walking distance from the Zoo!)

From Washington, we headed north and arrived back in Newburgh on Sunday afternoon.  Fred was able, of course, to locate the gas shutoff (and make it accessible) and in the ultimate irony, Central Hudson’s rep came on Monday and turned the gas on before I arrived to show her where to find the ‘necessary to keep the place from blowing up’ stove shutoff.  Sigh.

Decided to stay one more night in Newburgh to have lunch with Rev. Chris from the UUCRT.  Glad we did---it was good to get to know him better!!

I’m reminding myself that the purpose of this blog is to highlight our cruising life.  Seems we are spending as much time ashore as on the boat these days.  Or, perhaps, that I’m recording the events just so posterity will be served.  Our lives do seem to be a bit goofy at times, and we find ourselves enjoying the goofiness just as it is! 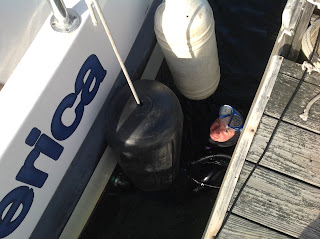 Two tasks ere we left Solomons….Jeff the diver came and scraped barnacles off the bottom of the boat.   His wife came as well (to watch for bubbles while he dove, and share a glass of wine afterwards.)   She works with her dad doing inlays on guitars.  Guitars that sell for $30,000 and get put in MOMA and the Smithsonian!   The people we meet provide a great part of the enjoyment of the cruising life!

Thing two was to diagnose the problem with the head (toilet, don’t ya know…)  No vacuum, no flush.   Fred finally located a pinhole in an important little diaphragm.  Bing bang boom, replaced it and Bob’s your Uncle!

Bye Solomons until next year!  We spent a couple of days in Portsmouth, VA awaiting good weather for crossing the Albamarle Sound.    Got to See Tom Hanks in the Bridge of Spies at the Commodore--historic ‘pick–up-the–phone-and–order–popcorn-and-dinner-from–your-table-before-the–movie’-Theater.  ‘Twas an excellent movie!  Next day I bought my first persimmon at the local Farmer’s Market.  Made a great smoothie! 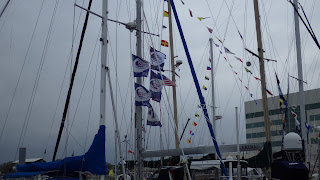 Ocean Marine Marina in Portsmouth was filled with sailboats.  A group called the World Cruising Club was staging two trips---one group was going to the Bahamas and the other heading to the British Virgin Islands.  Apparently these trips go every year. Departure had been delayed, and  the sailors were anxiously watching the weather…as were we. 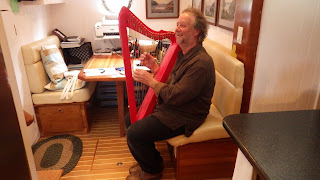 We tied up Sunday night at the Visitor’s Center in the Dismal Swamp.  As we were about to leave in the morning, Robin and Karen arrived in a sailboat they designed and built in Canada.  A delightful couple with about 6 musical instruments on board.  They were especially interested in  Fred’s harpsicle, as they built and sold harps for awhile.  Karen shared some music with us (Xxxxx Xxxxxxxxxxx doing Pete Seeger songs, for example) and showed us a really great video of their cruise down the Hudson River with a Pete Seeger sound track.  Fabulous.

Had an easy day on Monday, and stopped for the night at 2:30 in the afternoon.  Still staging for the Albamarle Sound.  Today we crossed without incident, I’m happy to report.   Of the many Sounds (for the non-boaters, Sounds are bodies of water that open to the Ocean.  Depending on depth, wind, tides and currents, calm water can become very unsettling in a hurry) along the ICW, crossing the Albamarle can be 2 hours of pain or pleasure.  The pain can usually be avoided, as we did by staying in Portsmouth and then moseying.  Caught a good ride, and now we’re anchored for the night with 3 other boats in the area near the Alligator-Pungo Canal.

As soon as steady internet returns, probably Thursday, I’ll post this.  Until then, hug a veteran and be proud and grateful for their service!   In our immediate family, my dad and brother served in WWII and Korea, and son Geoff continues his Army career with  his first stateside posting in several years!  Also, Fred’s dad worked in the Petroleum Industry during WWII, helping to keep the military moving, and granddaughter Tarryn’s special guy, Ron, is an Army Veteran.

And, of course, remember to breathe!