Disgraceful.  Commit to Monday Messages, and then don’t do ‘em.  And so now it is time for a major catch-up.

We did get to the Chesapeake!  And a month ago I wrote a lengthy travelogue, and then lost it by closing the silly thing without saving.  Who does that???  Needless to say, it is taking awhile to get back in the swing of this thing, but I’ve very nearly let go of my anger and frustration, so will begin again.   (I know, you didn’t really need to know all that, but I needed to write it down for posterity.)

We zipped up to Myrtle Beach from Charleston---stopped at our favorite place, Barefoot Landing (great ice cream).  Sad to say, just before docking we pulled far to the right side of the channel to allow a big boat to pass, and heard the awful scraping sound of rocks that were NOT far enough under our keel!  Happily there was no damage that hurt the boats ability to work, so we continued on the next morning  to Southport, then across the Cape Fear River, and back to another favorite---Swan’s Point Marina in Sneads Ferry, NC.

There is new management at Swan’s Point—Tina Turner and her mom.  They are making much needed improvements, and we wish them well! Hop, skip and jump thru the Marine’s Camp LeJune practice firing range---nobody was shooting at or around us---and next thing you know we’d rounded the Morehead City bend, and zipped up to Oriental. At 8 miles an hour.  :-) Stopped at Whittaker Landing this time---a new marina for us, and found Knute to be a great dockmaster.  He even drove me to the new mini-WalMart that graces Oriental (arrgghh) for a few supplies.

If you’re new to our blog, there are descriptions in excruciating detail of the East Coast IntraCoastal Waterway back in 2008, 2009, 2010 and 2011 postings. Since then, our cruising has been on the west coast of FL, and the inland rivers.   I’m highlighting here, but must say that we really were enjoying cruising through familiar waters, stopping with old friends and making new ones!
Neuss River, BelHaven, Alligator Pungo Canal, Alligator River, and then came decision time.  It was late in the day, the water was smooth as silk, and we had to cross the Albamarle Sound. Hmmmmm. Stay with Miss Wanda at the Alligator River Marina, or cross the smooth-as-silk Sound and reach the opposite shore in the dark.  We chose to stop before dark (Fred’s Rule #2), knowing that the next morning the wind would not be our friend.

Turned out to be a hoot!  Sure enough, the wind was whipping and the water roiling (don’t get to use that word very often.:-) )   We left early---along with PROUD MARY,  who pulled out ahead of us (ahem) and then jumped into our wake as the water got lumpy.    It was rough enough to tip over the Aero-Garden (oh, I was supposed to put the bungie cord back on after all this quiet time?  Oops.) and Fred’s navigational trick---turning east toward Coinjack rather than heading for our planned destination in Elizabeth City --made only a moderate improvement in the ride.   PROUD MARY’s skipper told us they wouldn’t consider turning back, as his wife “wanted to be sure someone knew where the bodies were”.  No worries, we finally reached  the lee of the land, hung a left, and motated into Eliz. City, where PROUD MARY, alive and well, stopped for the day.

Next stop for us was the Dismal Swamp!  Had a brief wait for the lock at South Mills, and we soon slid into the Visitor’s Center.  There was no room on the dock, so we rafted to the unusually outfitted Kadey Krogen, MANATEE-- just in time for happy hour!  First time we’ve met Ted and Sarah.  Their cruising is a spiral---they are doing the Great Loop for (I believe,) the 22nd time this year!  Tragically, I lost a million dollar bet with Sarah because I foolishly believed that HAPPY CLAMZ was a Great Harbour Trawler, not a Krogen Manatee, as Doug and Leslie are traveling with Great Harbour SEVEN TENTHS.  The two boats are a day ahead of us, and on their way to the GHTA Rendezvous.  I was sure HC was a GH, and Sarah phoned Leslie to prove me wrong!  Paid the debt with ½ a cantaloupe that Sarah said “tasted like a million bucks!”

We caught up with the above mentioned trawlers the next day in Portsmouth, VA, and docked  (in the North Basin) and dined (at the Commodore Theater—bucket list check!)  with Doug, Leslie, Henry and Debby.  Fun.

Our next stop was to be hauled at Ocean Marine in Portsmouth to check the props.  Sure enough, the starboard prop was badly bent, and the rudder banged up a bit as well.   As it was Tuesday, and we had to wait until Friday to get the props back from the repairman, we decided to make a run to St. Pete and pick up the car!  Found a cheap flight via Miami, and got to the airport by taxi in plenty of time.  Plenty of time.  Some sort of issue with the airplane’s windshield prevented take off until we’d missed our connection in Miami, so the Airline gave us a hotel room, and at 5:30 the next morning we were headed for St. Pete.  Chatted at and checked out the newly re-done St. Pete Municipal Marina Office, got a USA Today at the Hampton Inn, and headed north.  An overnight in Bluffton, SC, and Thursday we were checked into the hotel overlooking that free dock at the North Basin.

The boat was ready on Friday, but it was 2pm before we got docked at the N. Basin, so we accepted the BOGO Lunch offer we’d received the night before at the Marina restaurant, and Saturday morning headed out.
We made it an easy day and stopped at Hampton Roads before noon.  After a delicious afternoon rain I went to the Farm Fresh Market (yum) and that was our day!  Sunday was Flag Day, and the big flag went up to celebrate.  There was lots of boat traffic in the Bay around Thimble Shoals and Mobjack Bay, and by 2:30 we were happy to arrive at Deltaville.  The temp was 81 degrees with 100% humidity---and it is only mid-June!

We tied up at the Norview Marina (again a new-to-us-stop) and discovered INSANDITY was our neighbor.  This Great Harbour N-37 was PELICAN with its’ former owners. Enjoyed meeting and chatting with Chuck and Joyce.

Monday was a 90 degree day, so we took a day off with a/c.  Went for a dinghy ride when it cooled a bit, and just relaxed.   Tuesday morning, as we headed into the Chesapeake, SHINGABISS hailed us on the radio.  Liz and Steve had come into Deltaville the night before….

The Chesapeake was calm, and we had an easy run to the mouth of the Potomac.  At  2:30 we’d turned into the St. Mary’s River, where the Great Harbour Rendezvous was scheduled at the Corinthian Yacht Club. The dock was alive with GH owners, and we pulled into a slip where we would stay for a week.

Had a really good time hanging out with our fellow Great Harbour boaters—business meeting, winery tour, concert at St. Mary’s, good food, camaraderie and all that jazz!  Sunday morning we piled into a rental car with Joe and Punk  (CAROLYN ANN) and drove to Portsmouth to bring our car the rest of the way to where we are—or will be! What great friends are they!  Had a good lunch together at the Gosport Tavern in P’mouth, then drove two cars to Solomons, MD—our final destination for the boat---and Joe and Punk returned us to YOUNG AMERICA.  Whew!

For those who are map oriented, the GHTA Rendezvous was at a yacht club off the St. Mary’s River—first stop on the Maryland side of the Potomac.  The Patuxent River is the next major river flowing into the Chesapeake Bay north of the Potomac.  Solomons (and now YOUNG AMERICA as well as our car) is at the south end of the Patuxent.  We are now, and have been since June 22, at the Marina behind the Holiday Inn in Solomons, on the same dock we lived on in 2011 when we were here.

There is a lot to like here.  We have hotel privileges---free morning coffee, USA Today every day, gorgeous big swimming pool, workout center with sauna, and Isaac’s restaurant.  The Library, barbershop, nail salon and Maritime Museum are within easy walking distance. There is a UU Congregation 15 minutes away, and a movie theater 20 minutes in the other direction.  Chris and Jen live just 1-1/2 hours away—  There are plenty of good restaurants and a market with fresh seafood—we bought a dozen steamed crabs and learned how to take them apart---and new friends in boats tied up on the dock and old friends passing through.  Not to mention Geoff, Amy and Pete stopping on their way to their new posting at Carlyle, PA—the Army War College.  It is all good.
I went to book club at Jen’s house, and she and the kids have come down to spend a day on the water!

So, of course, we left, and drove to New York.  As I was born in a year that ends in a 0, July 2015 provided a milestone birthday for me!  The good news is that I am now old enough that I no longer have to take off my shoes at the airport!  Fred and the girls very generously planned and executed a fabulous Birthday Party for me! 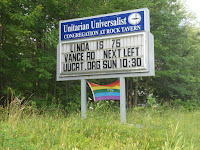 It was held at the UUCRT, and with Ada’s Selfie Studio about 60 folks were photographed as they arrived.Grandchildren helped with nametags and serving; there was great food, wonderful background music, and  cake and ice cream after the reading of the Desiderata and Let if be a Dance (words I’ve lived by).  Coincidentally, the UU had a brand new Labyrinth built into the lawn outside for folks to explore.  It was a spectacular afternoon!  I’m incredibly blessed---and looking forward with gratitude to many more happy years!

We are now back in Solomons, enjoying the most relaxing boat time we’ve had in a long time.  No deadlines, no major boat work.  Sunny days and pleasant evenings!  And air conditioning!
Will catch up again when we return from San Diego---US Power Squadron meeting the end of this month.

Until then, be well, remember to breathe, and thanks for stopping by!

Had to read the blog to find out which BD It was. A milestone indeed, congratulations to you both for continuing to cruise !