Below Portsmouth to St. Petersburg Nov.-May

Well, as I was saying, back in November, 2015….wait, I blinked!  It is now May of 2016!   For the sake of posterity, I will bring the blog up to date on the balance of the cruise to St. Pete, where we have  again 'wintered'.  Actually, from 2011-2015, our southern winter stop has been in St. Petersburg, on the west coast of Florida.  And we have pretty much parked here.  Doing what you are doing---living life,  enjoying each day, and taking what comes.  But we had to get here….

We left off the Blog as we were approaching our old friend the Neuss River. Tied up in Oriental Marina where we made plans to visit Joe and Punk Pica.  They've parked CAROLYNN ANN and purchased a home in New Bern.  Had a fine lunch and house tour and enjoyed very much the time spent with old friends!    No photos, darn it.

Moving right along (the current pushed us through Bogue Sound at 9 mph!)  we stopped in Swansboro at Dudley's Marina, and were treated to a lovely dinner at the home of Tom and Melissa, cruising buddies aboard JOURNEY.   Next day was Bridge Day---Onslow Beach, Surf City, Figure 8, and the Wrightsville Bascule—before we took a slip a the Mona Black Marina in Carolina Beach.  First time there---Randy, the Harbormaster, was a hoot! And he was up and out at 6:45 to toss our lines.  This time of year an early start is imperative, as the sun goes down by 4 or so!  Our 'new normal...' 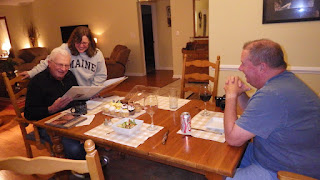 Our next stop was at Grande Dunes in South Carolina, and daughter Kris was there to meet us!  She and John are settled into their beautiful new home in Surfside Beach, and for 2 days we enjoyed dining on fresh fish, watching the critters in their backyard canal, and the generally excellent hospitality!  On Wednesday Nov. 18, John and Kris left a car at Murrels Inlet (Wacca Wacca Marina) and drove back to Grande Dunes.  Once they boarded the boat we all cruised down the river---again the current gave us a nice push---water is really high!  So high in fact, that Kris had to move their car up the hill as the parking lot was submerged!  Did I mention the outstanding fajitas Kris prepared for lunch?  I'm a proud mama!

We had a quick dinner so Aunt Kris could be off to pick up our grandson JT at Coker College in Huntsville, SC. She took him to the Myrtle Beach airport so he could fly home for his uncle's funeral.  It's never dull!

Though the days were short, we made good time---below  Charleston, we swooshed through Elliott's Cut at 7.2 mph with the engines at 1400 rpm—idle speed. Anchored in Tom's Creek, and then stopped in Beaufort at the Port Royal Landing---That is the marina you see in the background at the end of  "The Prince of Tides" when Nick Nolte is driving across the bridge thinking "Lowenstein, Lowenstein…."  Love that movie!   Klauss from MOON BEAM joined us for dinner—Beaufort is his home town!

On through Georgia with stops at Kilkenney Creek and Jeckyll Island (new shopping mall there, and a golf cart to travel to and from it!) and soon  we were tied up at Fernandina Beach in Sunny Florida!

Had a great visit with Maurice from QUOTIDIAN, a St. Pete boat we first met in Canada while on the Great Loop. One of the best parts of cruising is meeting great folks, and then meeting again in a different time and place.  Maurice was on his way home from what had been a fairly harrowing trip.  He single handed to and AROUND Maine, so he could see the white whales—blue ones too!  His boat is under 30 feet, and I'd say it was no match for the North Atlantic, but he was here to tell us about it!  Brave Man!

The next afternoon we heard a strange sound as we motored along, and the starboard propeller stopped turning.  We made it to St. Augustine—Camachee Island Marina had a nice long face dock to tie up to.   Thursday was Thanksgiving Day, and we were most thankful that Joe the Diver came around at 8 am.  He unwrapped a huge chunk of black plastic from the prop---heavy, unbending black plastic.  Uffda!  We kept a piece for a souvenir (threw it out recently…) and were off to Halifax Harbor in Daytona, with small craft warning type winds howling outside! 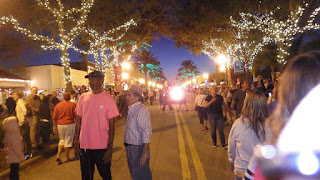 On Friday we pulled into the space at the free dock in New Smyrna Beach that Henry and Debbie on SEVEN TENTHS had saved for us.  Fun evening as the town had a parade and turned on the Holiday lights!

By 1:30 the next afternoon we were tied up at Harbortown Marina in Ft. Pierce where SHINGABISS has been living for some time.  Steve and Liz, our hosts in Minneapolis, who now live on the boat, will head for the Bahamas soon.  We had a great shrimp dinner on their boat! 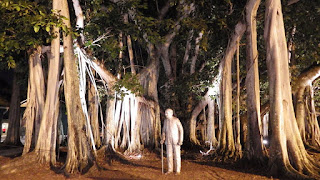 After Ft. Pierce we headed west!  Uneventful crossing of Lake Okechobee, a nice night at Indiantown Marina, a beautiful free dock at Port LaBelle, and next thing you know we've come down the Caloosahatchee River and finally I got to go to the Edison/Ford homes in Ft. Myers!   Bucket List:  Check!  The marina at Edison-Ford was great and we were comped tickets to the Light Show at the 2 homes.  Extra special was the huge Banyan tree.  It covers acres, and is second largest in the world--the really big one is in Oahu, Hawaii. Shades of the Little Prince!  No wait, his tree was a baobob tree, which looked like a rose in it's earliest days, but grew to become something huge and destructive if not uprooted early.   Hmmmmm.

At 9:30 am on Dec. 3, we turned north at mile O of the Gulf IntraCoastal Waterway.  There was an issue with a bridge ahead, so we tied up at the Gasparilla Marina for 3 days before moseying up to the Crow's Nest Marina in Venice.  There we docked behind NEVER SAY NEVER, an 86' Monte Carlo Yacht built by Benetau (who knew).  We weren't invited to the cocktail party for 35 prospective buyers.  Just as well….

Continuing with our early starts, at 7:15 a.m. on Dec. 7, we headed north, and by 4:30 had passed under the Sunshine Bridge, and bounced along Tampa Bay's lumpiness to the St. Pete Municipal Marina.  From the 7th until the 17th we got re-acclimated (even though we now were tied up on the North Dock). We put up our little 'mast tree',  and it was about the only decoration on the dock.   Thence to New York---Allegiant Airlines is our new best friend.  2.5 hours non-stop from Clearwater (20 minutes away) to Stewart Airport---10 minutes from our condo!  Fabulous!

We stayed in NY over the holidays, and then some.  Doctors and dentists etc.etc. and thankfully we each came away with a clean bill of health! 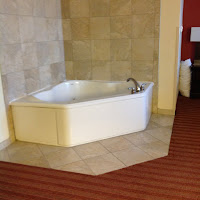 Back to the Boat by car on Feb. 5-8 with stops at Geoff and Amy's in Carlisle, PA, Kris and John's in SC, and JAX—a quick stop at LAZY DOLPHIN (Barb and Randy) and then a Holiday Inn with a free upgrade to a hot tub in the room!  What better place to watch the Super Bowl? (Obviously the photo is backwards---should be from the tub, looking at the TV!) 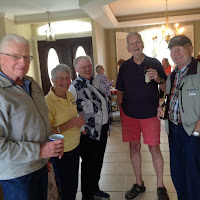 In February, even though it is Florida, we had the boat's furnace running many days.  The wind is cold!  It was too cold for the heated pool at Jerry and Janet Guyer's (AT LAST) home near Sarasota when they hosted about 24 Great Harbour family members, but it was an excellent event!

Feb. 15-19 we were in Orlando at the USPS Annual meeting.  Fred was re-elected Chair of the National Educational Fund, and I continued to play in the Ship's Store.
Had a super surprise when daughter Ada called to say they, too were in Orlando!  Met at Universal Studios for lunch and quality time with Ada, Jimmy, Katie Rae and Jim's sister, Dawn!  Lovely!    Not so lovely to drive back to Orlando that night to get the items we forgot at the hotel, but all in all it was a great week!

On March 3, a slip finally opened on the West Dock, our favorite! We happily moved there, and now live at 101 Bayshore Drive NE again!  Our mailbox (#19) is still here and we are happy to be back, enjoying the closeness of downtown, of Frescoe's Restaurant, and the open view of the harbor! 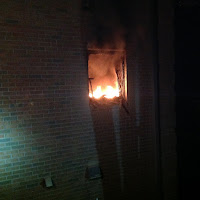 Spent Easter in NY—started the day with a 911 call to put out the fire in the condo next door.  A bit of excitement in the wee small hours!  We are sooo grateful for firemen who come out in the dark on a holiday.  (Hmm, very familiar that---Thanksgiving 1984, only it was our very own home on Sunset Drive that was afire!  Uffda!)  The rest of the day was indeed a lovely day at Ada and Jim's!  Lots of good food (sit down dinner for 29) and lots of kids, large and small, hunting for eggs in the yard.

While home, we drove to Boston for our annual MIT Luncheon---with 3 inches of snow atop the car!  We helped Ada put Salon Lucere back together after having the floors re-done, we watched granddaughter Laurel tap beautifully in 42nd Street at Arlington High School, attended the D2 Change of Watch and had a successful 'virtual Ship's Store'.    Sadly, my high school buddy Paula lost her fight with Lung Cancer.  She is already missed.  Although we didn't see her often, she was always just there, ready to pop in at a moment's notice!  Sigh.

In addition to Easter, the April trip was to do the taxes.  Unfortunately, we left the bundle of 2015 papers on the boat, so the process was extended until yesterday, the 11 of May.  THAT won't happen again, she said….
.
When we left New York to return to the boat, we turned the condo over to Kris and John.  He had very successful back surgery in Rockland County, and was able to recoup at 68 HPC.  That same week, in Virginia, Christopher bade his gall bladder adieu.  Happily, he, too, is enjoying a speedy recovery!

And so spring is here.  Our summer plans don't involve moving YOUNG AMERICA, just moving us.  Will update the blog when we are 'back on boat' in September.

Hope you are staying on the sunny side of life---who and wherever you are!
Be well and remember to breathe!