First, the davits got done.  Now it is, at least theoretically, possible for Chucky to ride behind the boat and be lowered into the water in a heartbeat. 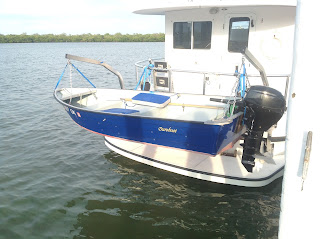 Once the davits were installed, we left St. Pete   It has now been two weeks and we've gone  864 miles.  That’s over 60 miles a day.  Considering that one day we went a total of 10 miles, it isn’t bad.

We were two weeks later than planned leaving St. Pete, so a bit of anxiety was hanging over us.  The worst thing to have when you are boating is a date sensitive destination!  June 16 (the day the Great Harbour Trawlers Association meeting begins on the Potomac River in Chesapeake Bay) seemed a whole lot closer then than it does now.  So we will just keep doing what we are doing---which, I might add, is very much unlike us.  We’ve been underway between 6:30 and 7:00 AM almost every single day!  Not the way we cruised for much of our 8 years, but very effective for this trip.

Have had fun times along the way.  We finally stopped at Marina Jack in Sarasota.  It’s been a bucket list item for awhile.  Check.

South of that, on Captiva Island, we happened onto T’ween Waters, a neat marina/resort---reminiscent of Banana Bay in the Keys ---with pools and hot tubs and boaters who return and return because they love the place.  And we may do that, too…

To get from the west coast of Florida to the east coast involves riding along the Caloosahatchee River (have to mention it just because I love the name!) crossing Lake Okachobee,  (a shallow lake that can kick up like crazy, but for our crossing it was a mill pond), and then transiting the St. Lucie canal to Stuart, FL. Water levels in this waterway are balanced by 5 locks, and I can’t figure out how they do it.   About a month ago, we wouldn’t have been allowed into the waterway because water in Lake Okechobee was too low to maintain a 9 foot depth.  When we passed through, we were taken up a mere 1 ft. to 1-1/2 foot in each of the first three locks.  Crossed the lake and the lock at Ft. Mayaca was wide open at both ends.  We simply drove through with 17 feet of water under the boat.  Then, 25 miles later, we locked down 12 feet to get back to sea level.   Dunno, but it worked.

We were sad to discover that the  davit on the port side of the boat drooped; it would not hold in the up position, and had to be tied in place.  Plus, 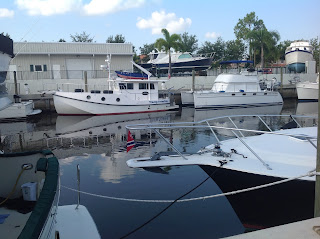 we stopped for the night in a marina that had dockage space for a 37' boat, but not for the 44' boat we have become. To resolve both issues, we put Chucky back on top of the boat.  A temporary fix, to be sure.  More to follow.

Memorial Day Weekend signals the beginning of summer and of the boating season.  Typically, we prefer to be tied up somewhere when enthusiastic boaters who seem to have more horsepower than common sense take to the waterways.   From the St. Lucie lock to Stuart, FL was that place for us this year.  Uffda.  Big boats, little boats, jetskis, water skiers, small children being towed in tubs and YOUNG AMERICA, a big lump of fiberglass plodding along in the channel, being tossed hither and yon by wakes.  Not pretty.  That was Saturday.  On Sunday and Monday, we left our dock at 6:30 am, well before the pleasure boaters came out to play.  Somehow we missed their morning travel, and we moseyed along happily while they basked in the sun.  By 3 in the afternoon, when it was time for them all to go home (and more than a few were, no doubt, full of beer) we were snugly secured in a marina.

Ft. Pierce, Cocoa Village, Daytona, JAX Beach, Jeckyll Island---zoom zoom.  That is a tad of humor.  At 8 miles an hour we could hardly be said to 'zoom' along...Everything is relative, no?  Hey, sometimes the current pushed us up to TEN miles an hour!!!

At Kilkenny Creek we decided to pass up the anchorage in favor of the Marina there.  Glad we did.  Got to relax in the rocking chairs provided and watch the fishing boats (they caught flounder and big trout!) be lifted out of the water  to their trailers, instead of backing the truck and trailer down a ramp into the water.  Neat.  WHO KNEW came in behind us, and we spent a very pleasant evening with Ted and Amy having dinner at the Marker 107 Restaurant---really, really busy on a Thursday evening.  Who knew? 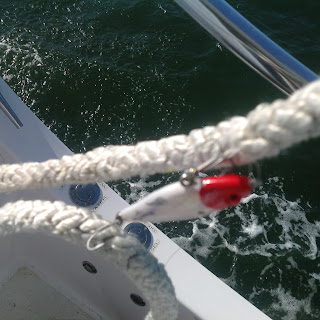 Speaking of fishermen, one caught our line when the line was holding the boat tied to a dock.  Evidently he tried to haul us in as the line broke off and we ended up with his lure!  At the Charleston Meretime Center, where we docked, a couple of gentlemen caught a 5' shark.  They kept it alive with a hose while deciding its' fate.  An hour later, we saw that dinner outweighed tossing him back. 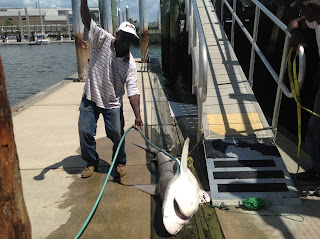 On the way to Charleston, we ran out of day 5 miles  before we got to the City. The water was aswarm with locals enjoying the balmy weather and we just wanted to stop.  Came across Ross Marine--not a marina, a boatyard, but with a long face dock.  (Non-boaters, a face dock has only water beside it, no pilings to break it up into sections (slips), so no need to worry about how wide the boat is. ) We moseyed in, it looked good, and we spent the night.  Called the next morning to offer to pay, and were told it wasn't necessary.  That is one set of nice folks we encountered.   Another is the young couple driving a runabout out of the Ashapoo-Cooksaw Cutoff--a skinny channel connecting two Rivers with great names!  On our VHF radio, we could hear the two big boats ahead of us decide that the water was too shallow for them, and make other arrangements.  I flagged down the runabout and asked how much water was in the cutoff.  "How much do you need?" was the reply.  When I said 3 feet, the couple in the boat---BLING THANG---very nicely led us through, weaving from side to side to find the deeper water.

It was easy to get into Charleston Meretime Center early in the day, and I walked to Harris-Teeter for some fresh foods.  That afternoon, my high school buddy, Paula Howell, drove over from Sumter, SC with her friend Patsy.  Had a lovely dinner at Blossom before sending them home with big big hugs.

On Monday we motored to Butler Island, where Liz and Steve aboard SHINGEBISS  rafted to the side of YOUNG AMERICA so we could have dinner together.  They are friends from the 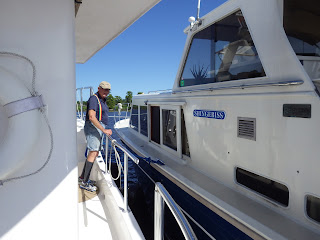 Loop in 2009 who became our Minneapolis/St.Paul mentors when we went up the Mississippi.   They now have rented out their St. Paul home, and are full time cruisers.  What a treat to spend an evening together.  And Liz taught me how to use my iPad to gather navigating information while cruising!  Kicking and screaming I'm being dragged into the 21st Century!

So onward, and upward.  We shall mosey along, and be in touch once again.  I've now learned to put photos on Facebook--it is actually easier than the blog, but we've made this blog a photo journal of our Travels, and so will continue to muddle along with it.  Maybe one day I'll figure out how to reunite the photos that got separated from text when Google revamped blogspot.  If anyone has a clue, I'd love to hear about it!

Be well, remember to breathe and we'll talk again!

Need wheels on your next trip? Renting a car can give you freedom and flexibility when you're traveling, and in some parts of the world it's the only feasible way to get around. The best service to find a car I've ever seen https://play.google.com/store/apps/details?id=hotels.car.rentals.flights.ukasoft&hl=en.