Well, Hi! Hey! and Hello there! (as Big Jon and Sparkie said way back when I was a youth!    I found them on the Internet, of course, and  even got to listen to the marginally famous Big Jon and Sparkie Birthday Song!   If you don’t know it, feel free to phone.  I’ll be happy to sing it for you! 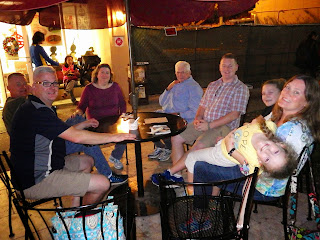 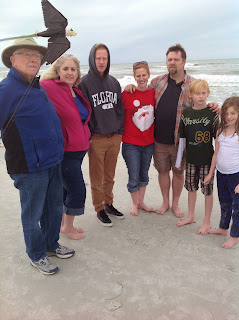 As planned, we’ve stayed in St. Pete since the holidays.  And fabulous holidays they were!  All three Mangelsdorfs, that is, Linda,  Geoff—with Amy and Pete, and Alan—with Holly, Paul, Laurel and Hazel; and a Carhart—Jen, with Chris, Matt, Casey and Becca  joined us in person.  The rest of our blended family,  Kris, John, Tarryn, Ron, Devyn, Molly, Keith, JT, Ada, Jimmy and Katie all showed up in photo form on Christmas Eve.  Splendid!

We were able to go to the Beach, the Winter’s Tale Clearwater Aquarium, the Nutcracker (performed by the Moscow Ballet at the Mahaffey Theater), and to the beautiful Dali Museum---where a very strange and interesting Picasso/Dali exhibit was presented; as well as hang out over pizza at the pool, take a short ride on YOUNG AMERICA 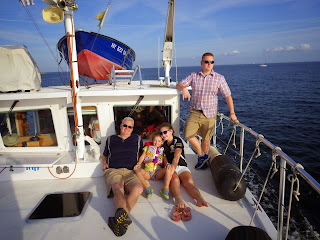 and generally relax and enjoy each other’s company.  The time flew by, and we treasure the happy memories!

When things settled down a bit, Fred and I began to put together the 2014 Winter Work List!  It turned out to have 50 some items on it---many of which will remain well into 2015, and maybe beyond! Quite a few items have been checked off, though, I am happy to report. 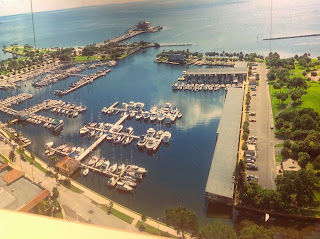 We LOVE our location.  Here is a picture of a picture of part of the St. Pete Municipal Marina. Tampa Bay stretches out at the top of the photo with daily glorious sunrises. Boats in the center belong to members of the St.Pete Yacht Club--the pink building with one long dock and 3 'arms'.  Our slip is to the left of the YC at the end of the third 'arm' of the Marina Dock.  The City is one block away!
Every day at sunset, a cannon is fired at the YC, the flag is lowered and folded, followed by the singing of Taps.  ACappella.  A beautiful big baritone voice rolling over the water.  Amazing.

We did our 3rd annual stint at the St. Pete Indy Car races, and sold a fair amount of liquid refreshment  (beer and water) to the race-goers.


A super treat in Feb. was a flight to Miami with Hugh and Sharissa Hazeltine (BLUE SKIES) in their Beachcraft Bonanza!  Left  St. Pete at 7:30 am, returned at 7 pm., and had a great day at the Boat Show!

Note: Next year the Miami Boat Show will be in the Miami Marine Stadium where we anchored in 2009.  It was a MESS, and I commented that people were working on rehab.  Apparently they've succeeded! 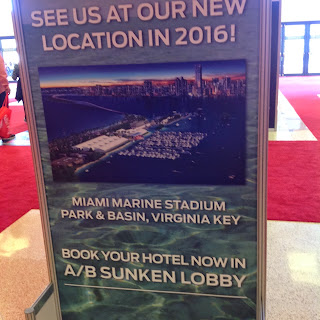 Also in February, I spent a long weekend in Illinois with my brother, Gene, his daughter Sandi and daughter-in-law Mary.  Sadly, in the two years since his wife died, Gene has not transitioned well, and in March Sandi helped him relocate to the memory care section of HarborChase of Plainfield, IL  (10 minutes from Sandi’s home) where he now lives.  A tough transition, and very challenging for all.....

Fred and I have discovered our new favorite airline, Allegient Air.  In April, we were delighted to find a 2-1/2 hour direct flight from the small airport in Clearwater to Stewart Airport in Newburgh, NY---10 minutes from our condo!  Yee-hah!

In the three weeks of our NY visit, besides spending Easter Sunday with 'our kids, my side' at Ada and Jimmy's home in Chester, NY,  we visited with family and with friends, we lunched in Boston, spent a weekend in CT at a Power Squadron get together, and drove to Swarthmore, PA for the funeral of one of the Dozen Cousins---Paul Mangelsdorf, who died at the age of 92.  It was Fred’s first return to the campus where he and his Cousin Clark were the only members of the 1953 Class of the School of Civil Engineering.

Once back in St. Pete, we’ve been catching up on overdue maintenance and repair.  A major home improvement was the addition of screen doors!  Can’t wait to get to Georgia where those big black flies fly!  Nah Nah! The screens have two important features: one, they are so fine as to be nearly invisible, and two, when a person walks into them, (and we both have), the screen gives way, and self corrects!  Perfect!

Another is the addition of a (removable) Yoga Swing on the back deck.  Melanie, a Yoga teacher, came to show us how to use it, and Plan A is that we will both become strong and fit---with core muscles that really work! Hmmmm.

We’ve given up the duct taped seat cushion in the salon, and re-covered all the seats.  The new fabric is soft and the design is more comfortable and supportive, so we are very happy with that.  Instead of green throughout, we’ve now bi-colored---blue above and beige below. 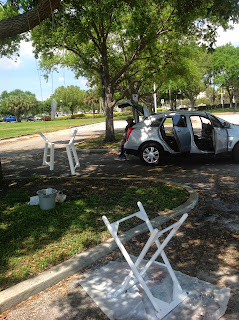 The directors chairs that Fred rebuilt and has sat upon to drive the boat for 20 some years got yet another new coat of paint. In the photo, the arms are swinging from a tree branch while the legs are sprayed on a small tarp.  One chair at a time.

This week we moved the boat from the Municipal Marina to Gandy Blvd.---about 95 blocks north, to the yard where Endeavor Catamarans are built and sold.  Russ, the Davit guy, found a space for us here while he installs a new lift system for Chucky (the bright blue dinghy) on the swim platform.  More on that as it develops. 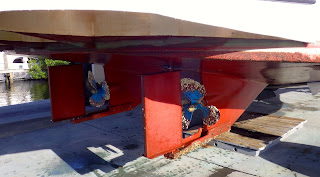 The plan, such as it is, involves finishing the davits and other yard work---for instance, we were hauled onTuesday to discover why our max speed coming here was only 4.8 kn.  It seems that sitting still in warm (currently 80+ degrees) salt water has made our waterline, props and skegs a haven for tiny barnacles.  The barnacles been scraped away, and hopefully we'll be under way before they attack again.  In summer Gulf boaters hire divers very frequently to clean the bottom, we have learned.     Time to move on!

Update will follow as the events transpire!  Trust all is well with you, and that you look forward to a sunny summer, wherever you are!   Do remember to breathe!
Posted by Linda at 3:54 PM