Unbelievable.  Only 11 days of 2014 remain.  My brother, a statistician, explains the fleeting years by saying that each year represents a fraction of the total number of years lived.  Hence to a 2 year old, one year is ½ of life, and therefore a very long time.  By the time the fraction is 1/74th it’s a very short hop to go from January to January.  Thanks, Gene.

The last portion of this year has flown by for us.  We did leave YOUNG AMERICA in Mobile, at Turner Marine.  I had a great visit in Albuquerque with nurse friends Maureen and Freddie, and then flew back to Newburgh, where Fred was spending time with daughter Linda as she recouped from her knee replacement.  Happily, she is doing very well!

It seems there is always something happening---this time we stayed an extra week to attend the Congregational meeting at the UUCRT, and add to the number needed for a quorum.  Quorum was met, and the vote was overwhelmingly positive to call the Rev. Chris Antal to become a settled ½ time minister.  Very exciting!

We also had a pre-Thanksgiving dinner with the families of our kids.  Kids.  Hah. The oldest, Geoff, who is in Germany, has turned 50.  The other 6, who (all but the daughter in VA) showed up that day, are 42 and up.  They are, and shall remain, our kids.  We had a great time and laughed a lot!  But why didn't I take any pictures?????

The next morning we hopped in the car and headed south.  We arrived at Turner’s on Wednesday, just in time for the annual turkey dinner.  Fabulous.  And then the stay in Mobile got extended as well.  We’d planned on having the generator’s fuel pump replaced---it was on order while we were away.  When Brett came (after Wednesday’s dinner) to install it, the conversation turned to the carbon on the engine room floor; a product of misaligned shaft seals.  The following Monday the parts were ordered, and on Friday the boat was hauled, so the new shaft seals could be put in place.

Three days after that, we were back in the water, heading east
across the Florida panhandle.   On the morning of the second day we passed a 42’ Jefferson that appeared to be hard aground.  It was 10 a.m. and the tide wouldn’t turn until 4:00 to lift them off, so Fred maneuvered our boat while I tossed them a 100’ light line attached to a 100’ really heavy line.  With the heavy line cleated to their bow and attached to the towing ring on our stern, we were able to drive away, and they (Craig and Kathy aboard NORTHERN STAR) came bopping along behind us.  Lines were retrieved without incident, thankfully, and we all motored on to the new (to us) free dock at Ft. Walton Beach.

Next stop was Panama City and then, one of our favorite stops, Appalachicola.  What a hoot to chat with a couple on the dock, and after a minute say “Wait a minute, aren’t you Peter and Pam?”  They were---we met them two years ago when they were moving from MA and building a home in Appalachicola.  We chuckled as Pam had just noted to Peter that she liked “that boat, but not as much as the other one like it” they had seen before.

Saturday, Dec. 13, we left Appalachicola at noon, motored east to the East Pass, and headed across the Gulf.  At midnite we saw a huge orange moon rising off our port bow, and for the rest of the night (and for the first time ever) we could see 360 degrees of horizon!  It was a beautiful night, the wind was light and the water calm.  At 1:30 Sunday afternoon we tied up at the Gulfport Marina on the west side of St. Petersburg.

Next morning it was an easy run around the peninsula into Tampa Bay, and lo and behold, our friends at the Municipal Marina were able to find an empty slip for us.   We tied up the boat, called Enterprise and headed back to Mobile to pick up our car.  Man, it is a LONG way to Mobile.  And just as far back! So from the 15-17 of Dec. we were on the road again.

Now, at last, we are settled in on the East Dock at SPMM, and busily decorating---tonight Fred built a light tree using the VHF antennas.  What a hoot! 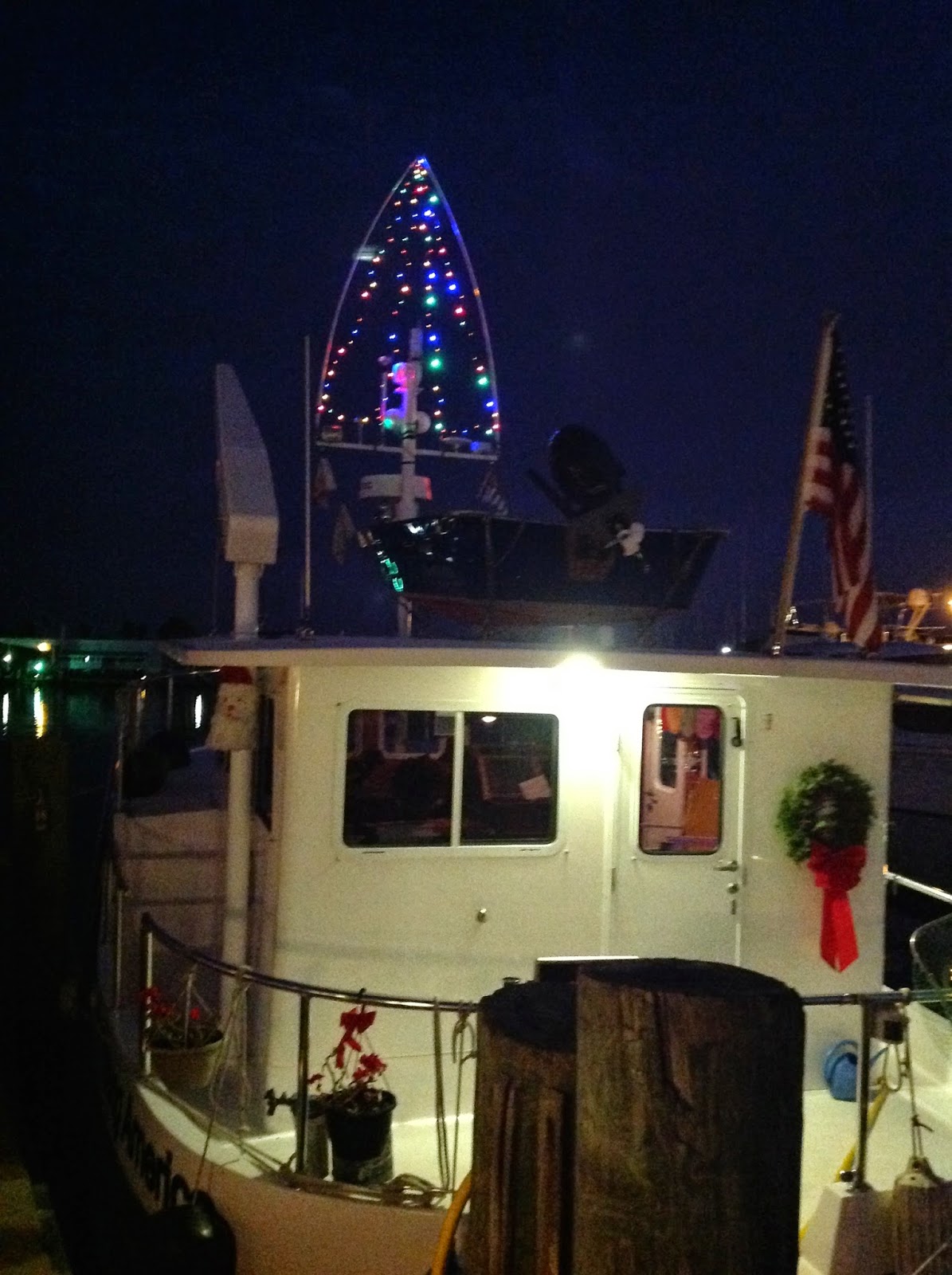 So we are very much looking forward to a happy Holiday Season.  That is our wish for you, as well.  May your days be merry and bright, and may all your good dreams come true!

We expect to remain in St. Pete until May, so this will be the last epistle for this year and half of next.   Happy New Year!!!